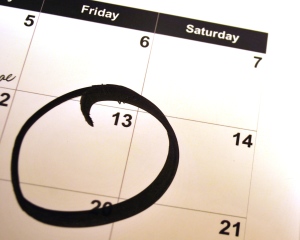 You survived the ghosts and spirits of All Hallows Eve. Now, just when you thought, phew, it’s safe to go out, along comes Friday the Thirteenth. Unless, you’re not superstitious? Come on; admit it, maybe a little.

As we head towards Thanksgiving, I remember the year a guest called with last minute regrets. Eva’s boyfriend had come down with a cold. Nothing serious, but he couldn’t come to the party. Would she come anyway? At first agreeable, Eva quickly changed her mind. No, guilt didn’t compel her to stay home to feed the boyfriend chicken soup. Eva was agreeable until she found out that we would be thirteen around the table. No cajoling could change her mind.

While I don’t think I’d turn down a dinner invitation, I guess there is a bit of superstition in all of us. Take crows and black cats. My backyard has been a favorite spot for neighborhood crows. Folklore tells us that a single crow is unlucky but two are good luck. Three means health, four wealth, five sickness and six, watch out, death. It’s hard to keep track, three today, a flock tomorrow. In any case, they are noisy and a general nuisance.

Until, a neighbor’s black cat started slinking around. Cats, particularly black ones, became notorious in the Middle Ages. That’s when the church decided they were demons, the familiars of witches. I don’t think my neighbor was a witch and, besides, her cat brought good luck. He scared away the noisy crows. They moved a year or two ago and I worried that the crows would be back. Blessed again, a new black cat has taken over. What’s the attraction? Although I have played one on Halloween, I am not a witch. I have no idea why these cats prowl my garden but I’m happy for the peace and quiet.

Ut oh, I’ve wandered off course; back to Friday the thirteenth. Celebrating TGIF is a recent thing. Biblical tradition holds that Friday is a no-good, very bad day. I’m not sure how, why or who knows these things but … Eve tempted Adam with the apple on a Friday. The Great Flood began on a Friday. The profusion of languages at the Tower of Babel was unleashed on a Friday.

Now, in defense of Friday (and, yes, to be contrary), the first American train robbery occurred on a Saturday. The Titanic sank on a Sunday. Hurricane Katrina hit on a Monday. The stock market crashed on a Tuesday. The great earthquake shook San Francisco on a Wednesday. At least one of the blizzards of 2015 blew in on a Thursday. BUT, with the words “Mr. Watson, come here, I want you.” the telephone industry was born on a Friday. I’m sure lots of other good things happened on other Fridays but, for the moment, that’s all I got.

Now for the number thirteen, it’s been plagued with distrust for centuries. Take your pick, ancient mythology or Christianity, a villainous thirteenth man shows up and havoc reigns. Roman witches gathered in covens of twelve and the devil made thirteen. From the Norse gods to the Last Super, malice and mayhem ensued when a thirteenth guest showed up at the table.

Perhaps Eva was on to something! Triskaidekaphobia, the fear of the number thirteen is more common than you might think. After all, most skyscrapers skip the thirteenth floor; airplane seat rows jump from twelve to fourteen and few, if any, hotels have a room thirteen.

What are your plans for Friday? Will you shout TGIF or cower under the covers? If in doubt, remember; laughter and cheer (and maybe one of those fancy artisanal beers) are perfect ingredients for a lucky Friday the thirteenth. 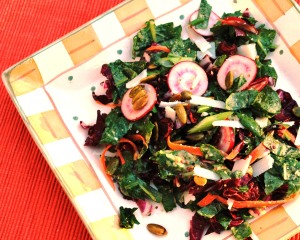 Need a good luck dish for Friday the thirteenth? Think greens. Kale is the latest foodie favorite so give it a try – now or at your Thanksgiving feast. Enjoy!
Serves 8

Put the garlic, mustard and brown sugar in a clean glass jar, add the lemon juice, season generously with salt and pepper and stir to combine. Add olive oil to taste, tightly cover the jar and shake vigorously to combine and emulsify. Let the vinaigrette sit for 30 minutes or more to combine the flavors.

Put the kale, radicchio, scallions, radishes and carrots in a large bowl and toss to combine. Sprinkle the salad with lemon zest, drizzle with enough vinaigrette to lightly coat and toss again.

To serve: transfer the salad to a deep platter or individual plates. Use a vegetable peeler or a coarse grater to make pecorino Romano shavings. Sprinkle the salad with the cheese shavings, cranberries and pumpkin seeds.

What about you? Are you superstitious? Feel free to share!