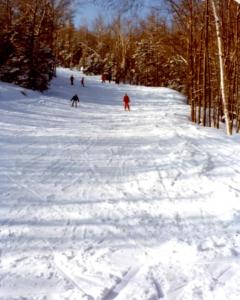 How could we have been so lucky? I don’t know how it happened (maybe it didn’t). When we were kids, we didn’t have to dream it, EVERY Christmas was white. By mid-December, the snow would start to fly. All rain and even the threat of a thaw were postponed until mid-to-late January.

Our winter wonderland made Santa’s job easy. From one year to the next, there was always some combination of Flexible Flyers, Flying Saucers, ice skates and skis under the tree. Oh and by the way, the Flying Saucers were not filled with little green men and did not whirl high overhead like a drone. They were aluminum disks that were perfect for flying down a hill at top speed. Flexible Flyers were made for hard packed, icy snow. Flying Saucers were made for the fluffy stuff.

Christmas vacations were filled with outdoor fun. There were plenty of little hills for sliding on Jackson Road. If we felt more ambitious, the country club was less than a mile away. Longfellow Pond was at the end of the street for skating.

Then, our already more than satisfactory Christmas vacations improved at least tenfold. Mom and Dad built a little brown house in the New Hampshire woods. After that, we spent all of our Christmas vacations whizzing up and down the slopes at King Ridge.

For the sake of our grandparents, we continued to celebrate Christmas Eve and Day in suburbia but we couldn’t get out of town fast enough. In the beginning, we headed north the day after Christmas. Then, we realized that most grandparents, including ours, don’t like to drive after dark. So, we’d have Christmas dinner at noon and they’d be out the door by two, maybe three o’clock. One year, I think they were barely out of the driveway before we were in our big blue station wagon and heading north.

King Ridge was a wonderful place for families. While it admittedly lacked vertical challenge, it made up for it with homey charm. Parents liked it because it was almost impossible to lose your kids. I’m sure a few kids managed to slip away for an hour or two but it took some doing. You couldn’t turn around without bumping into your mom or dad or one of your friends’ parents.

Kids liked King Ridge in spite of the ever-present village of adults. Ever-present, ever-vigilant and ever-ready to keep us from doing anything fun or stupid. Whether our actions were fun or stupid depended entirely on your perspective. If Mom and Dad were within eyeshot, we diplomatically agreed that jump was dangerous and bushwhacking through the woods was a bad idea. But as soon as they turned their backs, well, let’s just say that a kid’s gotta do what a kid’s gotta do.

Besides, you didn’t have to be a kid to do something silly. Take, just for-instance, the time our friends the McCauleys came up from Connecticut. Skip was a teenager and was delighted to have a few ski lessons. Dad was just as delighted to teach him. An athletic kid, Skip made amazing progress, deftly getting from top to bottom in one piece. As for Dad, he was not so deft.

Sometime, around mid-morning on the second or maybe third day of the McCauley’s visit, Skip passed Dad and joined us about three-quarters of the way down the hill. Showing off, Dad swooped down with plans for a dramatic stop and a magnificent rooster tail of light fluffy snow. Rather than dowse his friends and family, he pitched over … and broke his leg.

It looks like we’ll have a beautiful white Christmas this year. Have a safe holiday and bon appétit!

Sticky Buns
A special, old-fashioned treat for Christmas breakfast or any morning during the holiday week. Bakers will want to use their favorite white bread dough. If you’re not a baker, feel free to cheat with frozen dough. Either way, enjoy!
Makes 12-16 buns 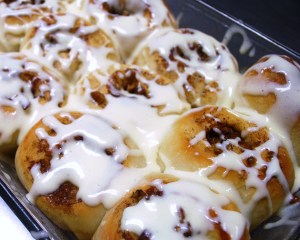 Generously butter the bottom and sides of an 8×8-inch or 8×10-inch baking dish.

Put the brown sugar, cinnamon, nutmeg and cloves in a bowl and stir to combine. Add the nuts and currants and toss to combine.

If using homemade bread dough, follow your recipe through the first rise.

Roll out the dough on a lightly floured surface into a 16×6-inch rectangle. Leaving a 1/2-inch border along one long side, generously butter the dough. Evenly sprinkle the sugar mixture over the dough.

Roll up the dough, jelly-roll style, forming a 16-inch long log and pinch the seam to seal. Cut the log into 12 or 16 equal pieces. Spacing them evenly, arrange the buns, cut side down, in the baking dish.

Cover the dish with plastic wrap and transfer to the refrigerator for a slow rise, 8-12 hours or overnight. (If you’re in a hurry, let the buns rise in a warm area until puffed, about 45 minutes.)

Position the rack in the center of the oven and preheat to 350 degrees.

Bake uncovered until the tops are golden, about 20 minutes. Cool for 5-10 minutes and drizzle with Creamy Icing. Serve warm.

With an electric mixer, beat the cream cheese until fluffy; slowly add the powdered sugar and continue beating until well combined. Add the sour cream, maple syrup and vanilla and beat until smooth and creamy. If necessary, add more sour cream until the icing is perfect for a nice, thick drizzle.

What about you? How will you spend the week between Christmas and New Year? Feel free to share!