So, I was a kid, hanging out on the beach with my friends. Life was simple. We swam, sailed, water-skied and played tennis. I’m sure we washed a few cars to raise money for Hospital Day. We probably went to a dance or two or maybe a movie on a rainy afternoon. On a scale of one to ten, it was a perfect life. Out in the real world, far from the idyllic hills and lakes of New Hampshire, a whole lot of everything was happening in the summer of 1969.

It was a turbulent time. Nixon was president and the Vietnamese War was raging. The evening news was filled with stories of war as well as protests, demonstrations and lots more. We didn’t watch a lot of news during the summer or any television for that matter. Our old black and white television had rabbit ears and a snow-filled screen. It played two stations, both ABC – one out of Portland and the other out of Manchester. While some memories are more vivid then others, here are some of the stories I recall from the summer of ’69 – the good, the bad and the ugly …

Enough was enough. A Saturday night police raid at the Stonewall Inn in New York on June 28 sparked the gay liberation movement. Long hassled by the police and homophobes, it was one raid too many. The gay community fought back and the Stonewall Uprising continued for several days.

Ted Kennedy drove off a bridge on Chappaquiddick Island on July 18. Mary Jo Kopechne, one of his brother’s campaign aides, died in the accident. Kennedy pled guilty to leaving the scene of an accident. He continued to serve in the Senate until his death in 2009. His long tenure and influence earned him the title – Lion of the Senate.

Two days later on July 20, Neil Armstrong took, “one small step for man, one giant leap for mankind.” He fulfilled the ambitious goal set by the late President John F. Kennedy to land a man on the moon by the end of the decade. We never looked at space or the moon the same again.

A few weeks later, a group of love-struck, teenage followers of cult leader Charles Manson went on a violent, drug-fueled murder spree. On the night of August 8 and 9, they killed five people, including the very pregnant, actress Sharon Tate. Not finished, they killed two more on August 10.

Thirty-two acts played between August 15 and 18 at the Woodstock Music Festival on Max Yasgur’s farm. They expected 50,000 but a half million kids made it to the rain drenched celebration of music, peace and love. Max proudly told crowd, “…you’ve proven something to the world … A half a million young people can get together and have three days of fun and music, and have nothing but fun and music, and I – God bless you for it!”

On August 18, as concert goers sat for hours in traffic trying to get out of Woodstock, Hurricane Camille came ashore in Mississippi. She brought widespread damage from the Gulf Coast to Virginia and 259 people died. Although the infamous Hurricane Party at the Richelieu Apartments never actually happened, the myth lives on pop culture.

And finally, Labor Day afternoon, September 1, the Nye kids piled into their mom’s station wagon along with the dog and two or three turtles and returned to suburbia. The kids grumpily nudged each other and bickered in the backseat while their mother silently wept and said goodbye to summer.

Fifty years later, I hope your summer is more good than bad or ugly.  Bon appétit! 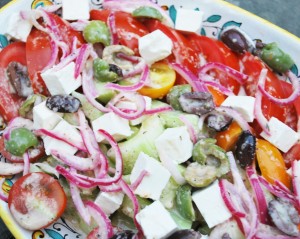 A classic summer salad, you can toss it together or dress it up by arranging everything into a lovely salade composée. (That’s French for composed salad – beautifully arranged ingredients provide a feast for the eyes as well as the stomach.) Enjoy!
Serves 8

About 4 tablespoons extra virgin olive oil
About 2 tablespoons red wine vinegar
1 small red onion, cut in half horizontally and then into thin wedges
2 cloves garlic, minced
1/4 teaspoon dried oregano
Sea salt and freshly ground pepper to taste
About 2 pounds heirloom tomatoes – a mix of large, small and cherry tomatoes in different shapes and colors if you can find them
1-1 1/2 European cucumbers
8 ounces feta, cut into 1/2-inch cubes
16-20 Kalamata or a mix of your favorite Greek olives, pitted and halved

Put the oil and vinegar in a bowl, season with salt and pepper and whisk to combine. Add the onion and minced garlic, sprinkle with oregano and toss to combine. Tossing occasionally, let the onions marinate for 30 minutes at room temperature or longer in the refrigerator.

Cut the cherry tomatoes in half, cut the larger tomatoes in wedges. Peel and seed the cucumbers and cut into chunks.

To serve – put everything into a large bowl and gently toss …

Serve at room temperature. Cover and store extra sauce in the refrigerator.

What salads are you arranging or tossing up this summer Feel free to share!